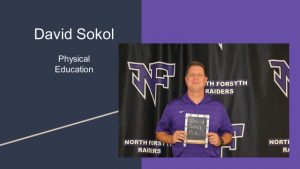 Coach Sokol has been coaching basketball for the last 25 years.

Coach Sokol is married to Beth Sokol and has 3 boys 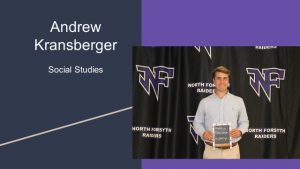 I am coming from Grand Rapids, Michigan where I grew up playing the game of lacrosse. I started playing when I was six and played in High School at Forest Hills Central. While in high school I played four years on Varsity, earned three first team all-state honors, two all-American honors, one Grand Rapids boys lacrosse player of the year honor and achieved victory in one state championship. I attended college at Tusculum University where I was a four year starter as an attackman and a midfielder; I was also voted as a team captain my senior season. I have been coaching lacrosse for the last 7 years at various levels ranging from U-11 to rising seniors. I have coached in and run many lacrosse camps, clinics and individual 1 on 1 sessions. Most recently, last summer I was the head coach of the Michigan Lax Academy rising senior team. 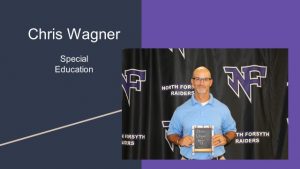 I am coming from Parkview.  I played college football at East Tennessee State University 1990-1994. 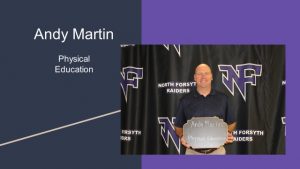 This is my 18th year teaching and coaching in Forsyth County.

I also coached the track and field, softball, volleyball, and boys and girls golf teams at Forsyth Central as well as Track and Field at North Middle.

I’m proud to now be a RAIDER! 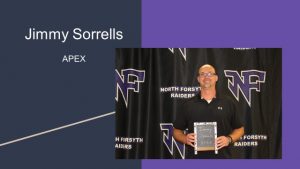 Coach Sorrells was previously at Flowery Branch High School in Hall County. He had been coaching in Hall County since 1999. As an athlete, he competed at the University of West Georgia in Cross Country. In 1993 he earned NCAA Division II All-American Honors by competing in the Division II National Championships. In 2001, West Georgia inducted Coach Sorrells into their Athletic Hall of Fame. As a coach, Coach Sorrells has 17 top 4 Team Finishes, which include 4 State Runner’s up and 4  State Team Titles. Coach Sorrells has coached 22 Region Team Titles in XC as well. As far as coaching individual athletes, Coach Sorrells has coached 6 High School All-Americans, 19 top ten finishers in XC (1 State Champion and 3 State Runner’s up), 49 Top 8 individual finishers in Track (14 State Individual Track Champions and 2 Individual Runner’s up), and 3 Top Ten All-Time Performers in the 3200, Pole Vault, and the 400 meters. 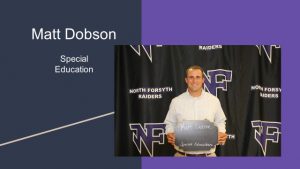 Matt Dobson is entering his first year coaching at North Forsyth High School.  Coach Dobson will be coaching the quarterbacks.

Coach Dobson is from Monticello, Florida and played high school football at North Florida Christian where he won 2 State Championships.  He played collegiate football at Georgia Southern University where he earned Academic All-American honors and Sunbelt All-Conference awards.  He graduated in 2016 with a bachelors degree in Social Studies from Georgia Southern.  He graduated in July of 2018 with a masters degree in education from Valdosta State.

The past two years, Coach Dobson has coached at Cook High School in Adel, GA.  He coached wide receivers in 2016 and was the defensive backs coach and special teams coordinator in 2017.