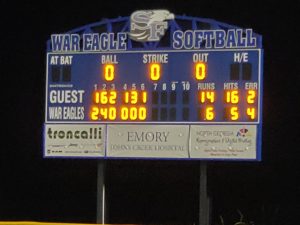 North Forsyth was in a dogfight with arch rival South Forsyth on Tuesday night.  After two innings of play, North was clinging to a 7-6 lead in a game that featured 10 runs scored in the second inning alone. Mallorie Black hit a mammoth three-run homer in the top half of the second, followed by a McKenna Segal grand slam in the bottom half for South.

Kyleigh Sanders came on in relief in the second inning and essentially shut out the Lady War Eagles the rest of the way.  North scored in every inning including a single run in the top of the sixth inning which forced a run rule as Sanders posted another scoreless frame to end the game in six innings.  With the win, North is now 16-2 overall and 6-1 in region play.  The Lady Raiders go out of region again on Wednesday as North will honor its senior class against Flowery Branch.  First pitch is at 5:00 PM at the Raider Softball Field.  We look forward to a huge turnout to honor six amazing young ladies on Senior Night.